Taking children away from their homes, families and communities caused a lot of pain and sadness that still exists today. Stolen Generations survivors suffered a huge amount of grief and trauma, losing their connections to family, identity, land, language and culture. These children have become known as the Stolen Generations.

What happened to the Stolen Generations?

Stolen Generations survivors individually have their own painful lived experiences of removal, however they also collectively share trauma from effects like living in institutions, being placed in non-Indigenous homes and being trained to be domestic servants and stockmen for unpaid labour.

Children were forced to assimilate into non-Indigenous society and culture. They were refused access to their family and were stopped from speaking their native language and using their birth name. The government didn’t keep records of birth dates or place of birth of many of the children. This made it extremely difficult for them to reconnect with their biological families when they were older. In many cases children were removed and housed far away from where they were stolen.

You can learn about some of the stories by watching the stories of Stolen Generations survivors that we have collected:

The removal of Indigenous children was a deliberate effort by the Australian Government as part of its assimilation policy.

The 1997 Bringing Them Home report found that government officials took children away from caring and able parents. These parents often had no way to stop this. They also had no way to get their children back once they were removed. In other cases, officials falsely told parents that their children had died and told children their parents and grandparents no longer wanted them. Many Aboriginal and Torres Strait Islander people are still searching for lost parents and siblings today. This has had a long lasting and traumatic impact on the lives of many.

Children with lighter skin colour were especially vulnerable. Officials wanted to assimilate these children into the non-Indigenous community and so they specifically targeted them. Sometimes this happened as soon as a baby was born.

Effects of the Stolen Generations

The broken cultural, spiritual and family ties affected the parents and children involved, as well as many Aboriginal and Torres Strait Island communities across Australia.

Oral language and traditions that could only survive if passed down from one generation to the next were lost, and many parents struggled to get over the loss of their children. 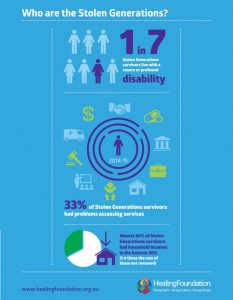 Children experienced neglect, abuse and they were more likely to suffer from depression, mental illness and low self-esteem. They were also more vulnerable to physical, psychological and sexual abuse in state care, at work, or while living with non-Indigenous families.

A recent study by the Australian Institute of Health and Welfare showed that the removed children were less likely to have a secondary education and three times more likely to have a police record.

Because these children did not grow up within a healthy family structure, the effects of the Stolen Generations are felt today as they start their own families. This is known as Intergenerational Trauma.

Where are the Stolen Generations survivors today? 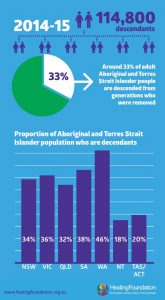 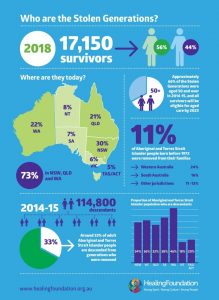